Fragmentation and Inefficiencies in the U.S. Equity Markets: Evidence from the Dow 30

Using the most comprehensive source of commercially available data on the US National Market System, we analyze all quotes and trades associated with Dow 30 stocks in 2016 from the vantage point of a single and fixed frame of reference. Contrary to prevailing academic and popular opinion, we find that inefficiencies created in part by the fragmentation of the equity market place are widespread and potentially generate substantial profit for agents with superior market access. Information feeds reported different prices for the same equity, violating the commonly-supposed economic behavior of a unified price for an indistinguishable product more than 120 million times, with “actionable” dislocation segments totaling almost 64 million. During this period, roughly 22% of all trades occurred while the SIP and aggregated direct feeds were dislocated. The current market configuration resulted in a realized opportunity cost totaling over $160 million when compared with a single feed, single exchange alternative a conservative estimate that does not take into account intra-day offsetting events.

Scaling of inefficiencies in the U.S. equity markets: Evidence from three market indices and more than 2900 securities

Using the most comprehensive, commercially-available dataset of trading activity in U.S. equity markets, we catalog and analyze dislocation segments and realized opportunity costs(ROC) incurred by market participants. We find that dislocation segments are common, observing a total of over 3.1 billion dislocation segments in the Russell 3000 during trading in 2016, or roughly 525 per second of trading. Up to 23% of observed trades may have contributed the the measured inefficiencies, leading to a ROC greater than $2 billion USD. A subset of the constituents of the S&P 500 index experience the greatest amount of ROC and may drive inefficiencies in other stocks. In addition, we identify fine structure and self-similarity in the intra-day distribution of dislocation segment start times. These results point to universal underlying market mechanisms arising from the physical structure of the U.S. National Market System.

An agent-based model for financial vulnerability

This study addresses a critical regulatory shortfall by developing a platform to extend stress testing from a microprudential approach to a dynamic, macroprudential approach. This paper describes the ensuing agent-based model for analyzing the vulnerability of the financial system to asset- and funding-based fire sales. The model captures the dynamic interactions of agents in the financial system extending from the suppliers of funding through the intermediation and transformation functions of the bank/dealers to the financial institutions that use the funds to trade in the asset markets. The model replicates the key finding that it is the reaction to initial losses, rather than the losses themselves, that determine the extent of a crisis. By building on a detailed mapping of the transformations and dynamics of the financial system, the agent-based model provides an avenue toward risk management that can illuminate the pathways for the propagation of key crisis dynamics such as fire sales and funding runs.

Toward an understanding of market resilience: market liquidity and heterogeneity in the investor decision cycle

During liquidity shocks such as occur when margin calls force the liquidation of leveraged positions, there is a widening disparity between the reaction speed of the liquidity demanders and the liquidity providers. Those who are forced to sell typically must take action within the span of a day, while those who are providing liquidity do not face similar urgency. Indeed, the flurry of activity and increased volatility of prices during the liquidity shocks might actually reduce the speed with which many liquidity providers come to the market. To analyze these dynamics, we build upon previous agent-based models of financial markets, and specifically the Preis et. al (Europhys Lett 75(3):510–516, 2006) model, to develop an order-book model with heterogeneity in trader decision cycles. The model demonstrates an adherence to important stylized facts such as a leptokurtic distribution of returns, decay of autocorrelations over moderate to long time lags, and clustering volatility. Consistent with empirical analysis of recent market events, we demonstrate the impact of heterogeneous decision cycles on market resilience and the stochastic properties of market prices.

Society's techno-social systems are becoming ever faster and more computer-orientated. However, far from simply generating faster versions of existing behaviour, we show that this speed-up can generate a new behavioural regime as humans lose the ability to intervene in real time. Analyzing millisecond-scale data for the world's largest and most powerful techno-social system, the global financial market, we uncover an abrupt transition to a new all-machine phase characterized by large numbers of subsecond extreme events. The proliferation of these subsecond events shows an intriguing correlation with the onset of the system-wide financial collapse in 2008. Our findings are consistent with an emerging ecology of competitive machines featuring ‘crowds’ of predatory algorithms, and highlight the need for a new scientific theory of subsecond financial phenomena. 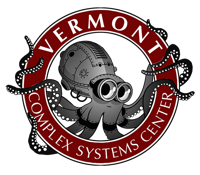 Copyright ©2019 The MITRE Corporation and the University of Vermont. All rights reserved. Approved for public release. Distribution unlimited 18-03431-3.

This work is licensed under a Creative Commons Attribution-NonCommercial-NoDerivatives 4.0 International License.